How photovoltaic technology is changing the entire electricity system

It is used to power everything from pocket calculators to space satellites, and it can be found everywhere, from the rooftops of South Africa’s shantytowns to the lakes of China and suburbs of Europe. Panel by panel, photovoltaic (PV) solar power is changing the way we consume, generate and think about energy.

Located near the Gobi Desert in the Qinghai province of China, the 2.8 GW Golmud Solar Park is today the world’s largest solar farm. It is likely to expand even further in coming years as China aims to reach 16 GW within the next five to six years. Indeed, PV solar technology has come a long way since 1839, when French physicist Alexandre-Edmond Becquerel demonstrated that two plates of platinum or gold in a solution would produce a tiny current in the presence of sunlight. This photovoltaic effect was found to occur with other materials as well, and by 1950 Bell Labs in the USA was creating the first solar cells based on silicon, a vastly cheaper and more available material than gold.

The 1980s and 1990s saw the first attempts to use PV as a power source for homes and businesses, although to begin with adoption of the technology was hampered by its high cost and low efficiency. Then China got in on the act. China’s PV production capacity shot up from 50 MW a year in 2004 to 23 GW a year in 2012, an almost 46,000 per cent increase over just eight years.

This helped to cut the cost of PV modules by 65 per cent between 2008 and 2011, just as the technology was gaining in terms of efficiency and the search for ways to decarbonise the energy system was picking up speed. Today, “PV has become the cheapest or at least one of the cheapest sources for clean energy,” says Tim Kallas, chief investment officer at Blue Elephant Energy, which develops, acquires and operates solar parks and wind farms in eight countries across Western and Central Europe.

“Over the course of the last few years, solar PV has become more efficient as the technology has developed and bigger factories provide for economies of scale,” he says. 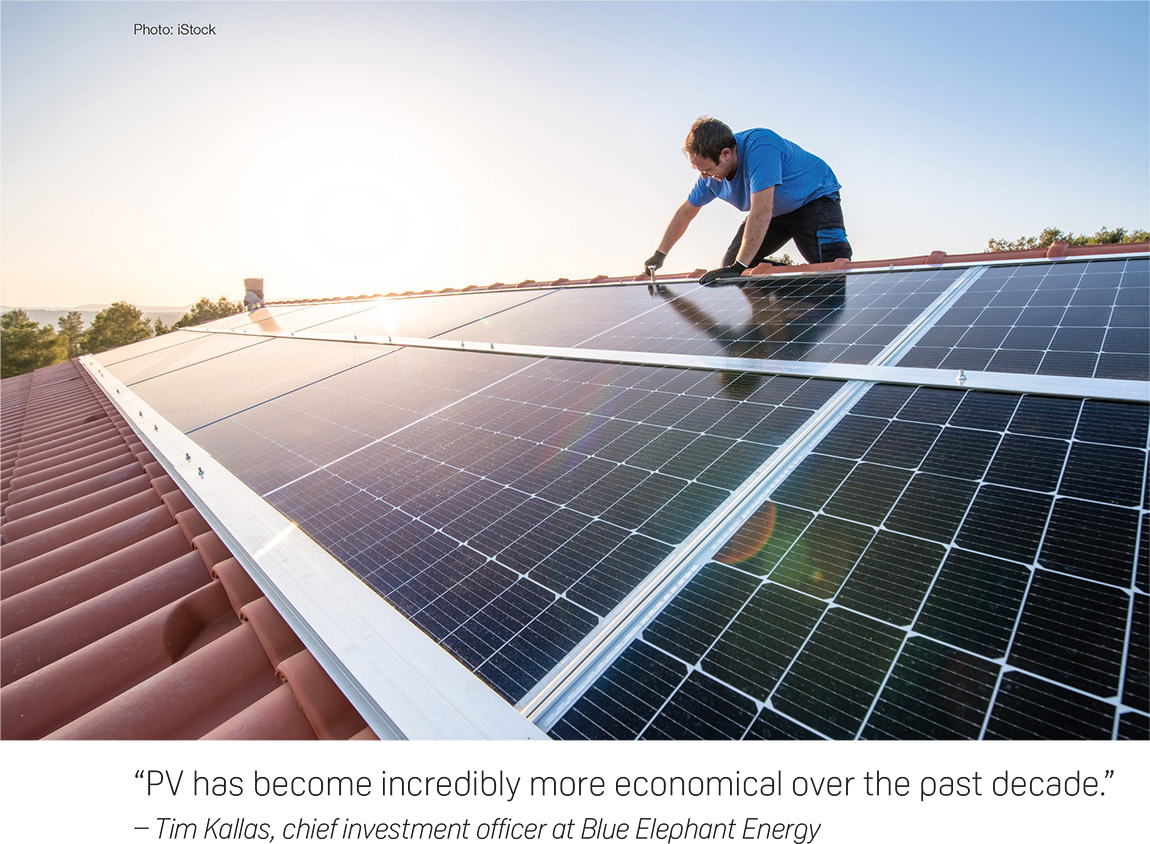 It has surpassed fossil fuels.” 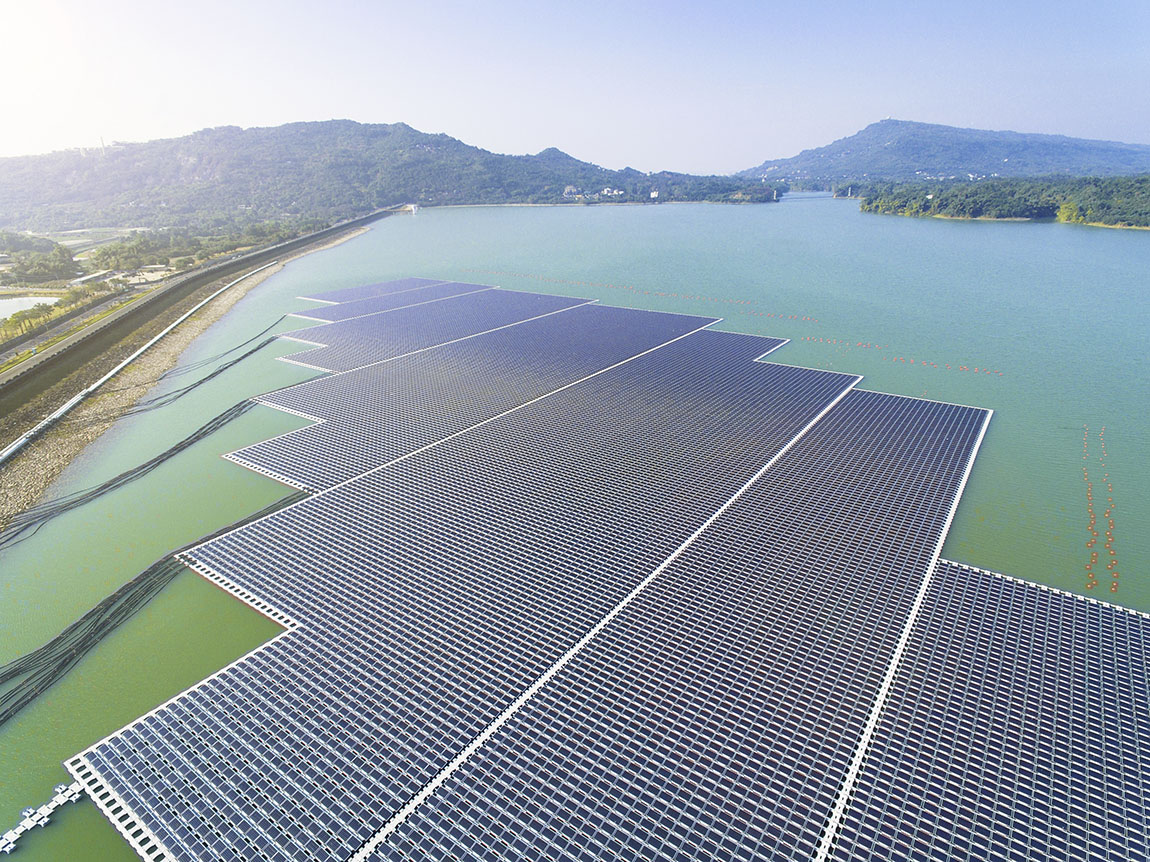 Floating PV is becoming popular in Asian and European markets where there is not much free land. Photo: dreamstime.com

As well as being cheap and reliable, PV is arguably the most versatile form of electricity generation on the planet. It can be used anywhere there is sunlight and can scale from a single panel to the millions used in some of the world’s biggest renewable-energy plants. These features have led to booming demand for PV across all markets and customer sectors, from homeowners to major energy suppliers.

“Solar PV generation increased by a record 179 TWh (up 22 per cent) in 2021 to exceed 1,000 TWh,” says the International Energy Agency in a September 2022 tracking report on the technology. “It demonstrated the second largest absolute generation growth of all renewable technologies in 2021, after wind. Solar PV is becoming the lowest-cost option for new electricity generation in most of the world, which is expected to propel investment in the coming years.”

The biggest global market for PV is in China, followed by the USA and India, Berg says. Natalia Ordóñez, head of development and construction at Exus Management Partners, an independent investment and asset management company focused on the renewable energy sector, says the company sees “significant potential” for solar energy in Europe and globally.

as it becomes increasingly apparent that utility-scale PV provides the lowest cost when adding new electricity capacity, particularly with the ongoing rise in natural gas prices,” she says. 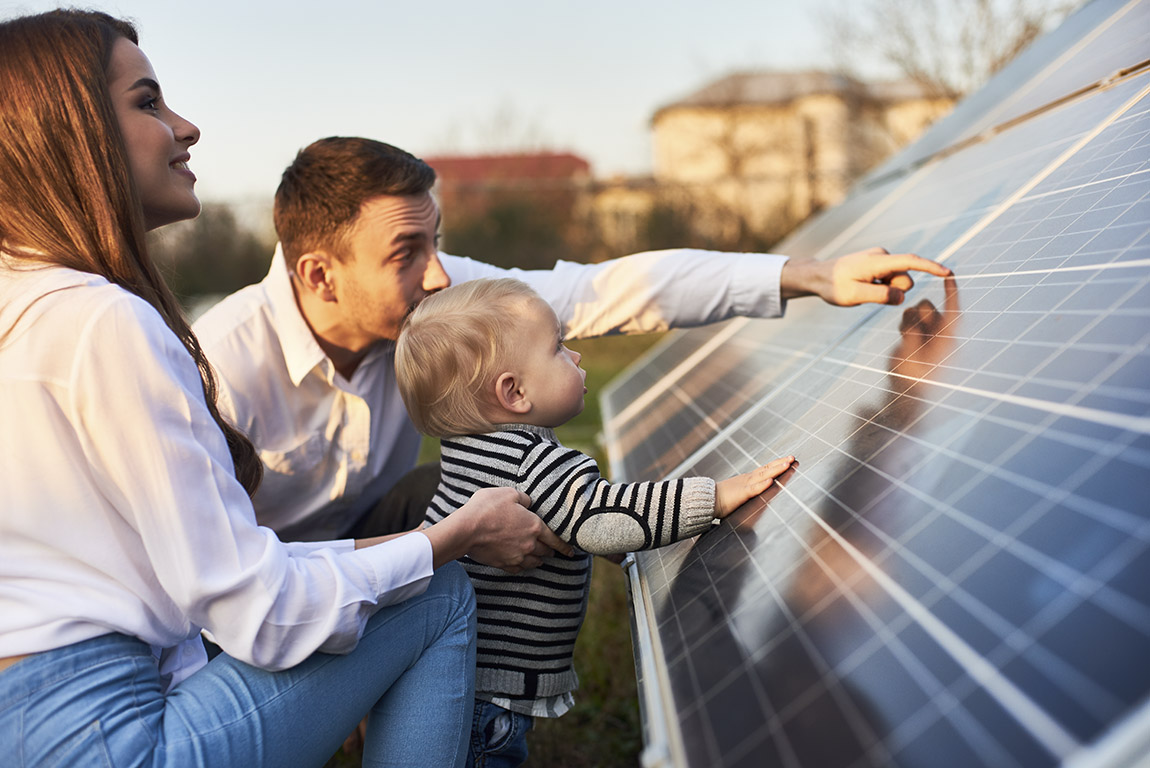 Experts predict the global growth of PV will speed up even more in future. Partly, this is because the technology is getting better all the time. “From our point of view, there is not one big innovation, but several evolutions over the years which contributed to the increasing attractiveness of solar,” says Kallas at Blue Elephant.

One example is the growing affordability and reliability of tracker systems. “With a tracker, your solar system can follow the sun over the day, versus a fixed system which has the same tilt the entire day and has the maximum output at midday,” Kallas says. “A tracker can increase the production of green energy significantly in the mornings and in the afternoons.”

A second major PV innovation has been the introduction of bi-facial modules. “Bi-facials convert the sunlight from the front and the back of a module into clean energy,” says Kallas. “The ground reflects the sunlight to the back part of the module. Obviously, the back provides less energy than the front, but it is still quite significant.”

Another factor that could further drive PV adoption is a streamlining of permitting processes in regions such as the European Union (EU). “Given the emergency caused by international energy prices, the EU is committed to help speed up renewable energy projects, making it easier for companies to build wind and solar farms,” says Laurent Jouvin, director of operations and energy management at Exus Management Partners.

For example, he says: “The Spanish government has recently approved a new package of measures within the framework of its national plan, which includes an acceleration of temporary procedures to determine the environmental approval of new projects in low- or moderate-sensitivity areas. With these new measures and the ease in planning processes, in coming years we expect to see a huge deployment of renewable energy across Europe.”

Kallas at Blue Elephant says PV is not only being installed more often, but also in more and more places. “Solar is being deployed in locations which have not been thought of in the past,” he says.

One example is PV being deployed over water. Floating PV is becoming popular in Asian and European markets where there is not much free land and “has the advantage that you can use the surface of a lake which could not have been used otherwise,” says Kallas. “It has positive side effects as it decreases evaporation [and] keeps water temperature lower, which might be beneficial to fishes and the ecosystem.”

Another trend is agri-PV, where crops are grown under solar panels on farmland, giving farmers two sources of income for the same piece of land. But perhaps the most significant trend related to PV is taking place on the rooftops of private homes around the world. Here, homeowners are using PV to create their own power, supplementing or even replacing the electricity they used to get entirely from the grid.

PV forms the heart of prosumer energy systems and is leading to profound changes in global electricity distribution systems. “We can expect electric power systems owners and operators to transition to a ‘grid to prosumer approach’, to provide organisations the ability to address their sustainability goals and to progress along their digital transformation,” Koehler says.

Because prosumers can send electricity to the grid as well as receive it, they are forcing the development of resilient bi-directional smart grids that offer “not only a more efficient way to manage energy, but the potential to decentralise, decarbonise and stabilise power systems,” he says. “Smart grids will be able to support a 70 to 80 per cent decarbonised power generation mix, incorporating clean energy from microgrids, solar PV and wind farms, powering businesses towards a net-zero future amid growing consumer pressure on firms to become more sustainable.”

These grids, with PV as a major source of distributed generation, will not only help to reduce carbon emissions, but also deal with some of the impacts of climate change. Koehler foresees “a prosumer revolution, potentially putting a greater share of the energy supply back into the hands of consumers and businesses, with a baseload from larger providers. 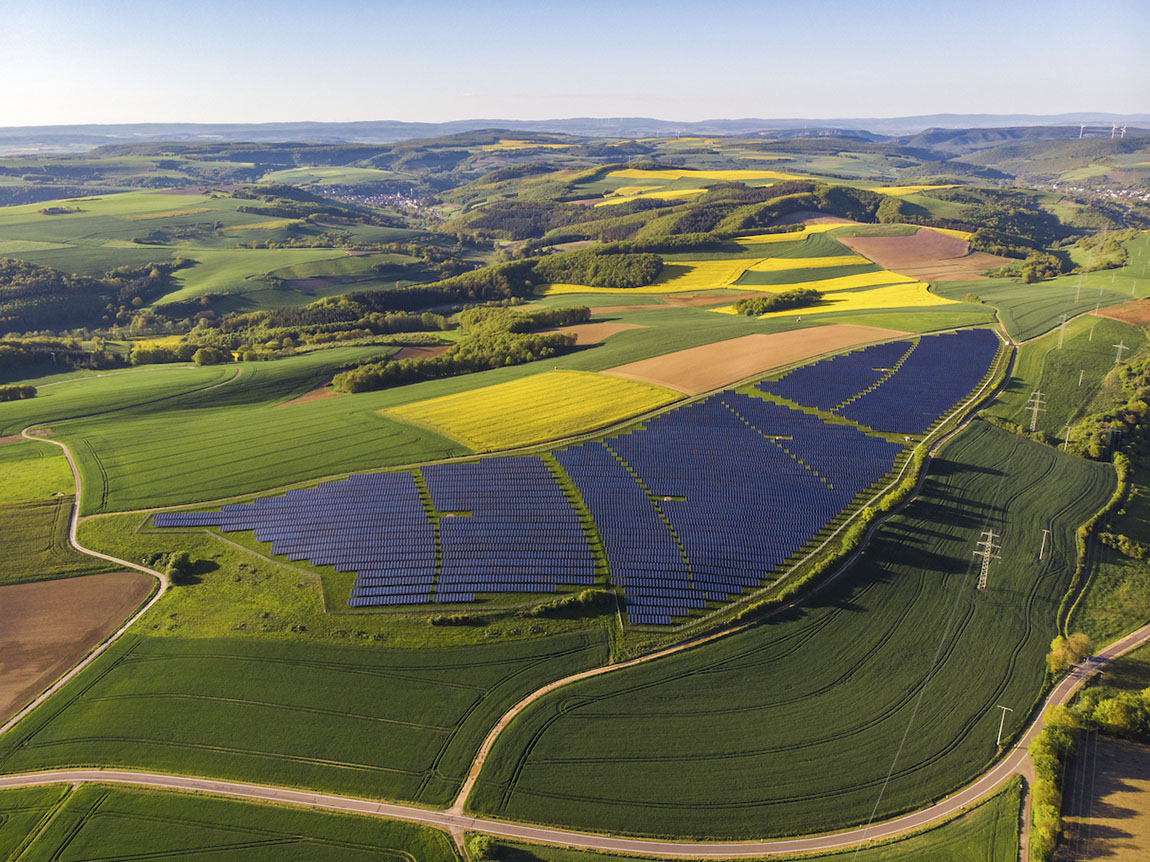