Ten Striking New Solutions for Energy Storage: But what will we do at night?

A we move to grids based on solar and wind power, the ability to store energy becomes increasingly critical to counteract their intermittent nature. As often highlighted by cleantech sceptics, it is one of the most obvious challenges the renewable energy sector faces, but it is also one with many striking new solutions. Cleantech reporter, Jason Deign, explores ten novel ways of storing energy for use on the grid.

Today there are two main ways to store energy. One is pumped hydro, which involves connecting two reservoirs at different heights. When there is an excess of electricity on the grid, it is used to pump water uphill from the lower to the higher reservoir. Energy is produced by letting the water flow back downhill. Pumped hydro is the most widely used form of energy storage today, in terms of available capacity around the world, but developing more of it is restricted by the availability of sites that could support the reservoirs needed.

The other big source of energy storage today is in lithium-ion batteries. This is a versatile technology that is used in everything from digital devices to electric vehicles. However, it is subject to concerns over materials’ availability, so using lithium-ion batteries as a major grid storage asset, for example to power cities or countries for hours or days on end, is prohibitively costly and impractical.

Because of the limitations of these two major storage technologies, the search is on for alternative concepts that can store massive amounts of electricity at relatively low cost. There are plenty of options, Here are ten of the most promising – and the companies working with them.

Flow batteries are electrochemical storage systems where chemical energy is stored in liquids that are pumped across separate sides of a membrane to produce electricity. The liquids can be relatively cheap and commonplace. USA company ESS Inc, for example, uses a mix of iron, salt and water. This means storage costs are low. And because storage capacity of the system depends on the amount of liquid, or electrolyte, flow batteries can be equipped with massive tanks that will allow them to store dozens of megawatts of energy that can be delivered for hours on end. 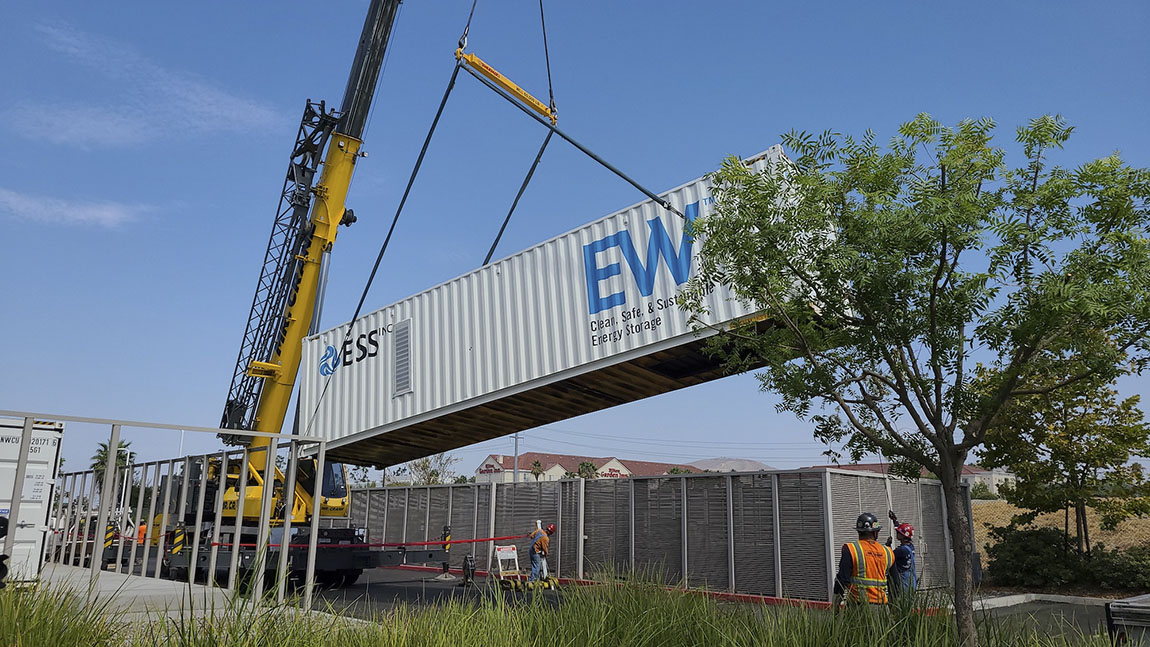 Few things are cheaper and easier to get hold of than water, air and iron. And Form Energy, a company backed by investors including Bill Gates’s Breakthrough Energy Ventures fund, has found a way to use them for energy storage. Form Energy’s iron-air battery systems essentially charge up by turning rust into metallic iron and discharge by reversing the process. Its first commercial products are designed to store up to 100 hours of electricity at a time, “at system costs competitive with legacy power plants,” says the firm.

Energy Vault of Switzerland has come up with a version of pumped hydro that does not need massive reservoirs and can be installed in a city block. Instead of using spare electricity to pump water uphill, it uses the energy to lift concrete weights up a tower. These can then produce electricity by spinning generators as they are lowered back down. The idea has caught the eye of numerous corporate investors, including Cemex, one of the world’s biggest cement makers.

Another company looking into concrete for storage is EnergyNest of Norway. However, rather than exploiting gravitational energy, EnergyNest is using a mix of concrete and steel, called Heatcrete, to store heat. EnergyNest’s Thermal Battery is modular, scalable and designed for industrial applications. It is made from abundant, recyclable and non-hazardous materials that are easy to acquire, which means storage can be made locally and transportation can be kept to a minimum.

UK-based Highview Power has found a way of storing energy in thin air. At least, the medium starts out as thin air in the beginning. Highview Power uses excess energy to cool it down to a liquid, shrinking the volume in the process so it can be stored in industrial tanks. When the energy is needed again, the system simply lets the liquid air warm up. As it does this, the air expands and can be used to drive a turbine. Not only is the storage medium completely free, but most of the equipment used by Highview Power is available off the shelf.

Air does not need to be cooled to a liquid for it to store energy. You can simply compress it inside a reinforced tank or underground cavern. That is the approach being taken by Canadian technology developer Hydrostor. The company is one of several pursuing adiabatic compressed air energy storage, where the heat that is given off by the compression process is stored to power the warming up phase during discharge. Hydrostor says its systems can last for more than half a century with no replacements.

Like EnergyNest, Australian startup MGA Thermal is looking to store thermal energy – but in a more advanced medium. The company says it has invented a material called Miscibility Gap Alloy, where metallic material is embedded in a matrix made from reprocessed scrap. Upon heating, the metallic material melts and retains thermal energy. This is then released again as the matrix cools. “Think of an MGA block like a choc-chip muffin,” says MGA Thermal. “When heating a muffin, the chocolate chips melt yet the cake structure itself stays solid.”

While several companies are looking at ways to store heat, Malta of the USA is going one further. Not only does it store heat, in molten salt, but also cold, in anti-freeze. This combination means Malta, which at one point was backed by X, the moon-shot technology incubator at Google’s parent Alphabet, can achieve much higher rates of energy efficiency than other thermal storage contenders.

ARES: energy storage by the trainload

Among the companies looking to develop gravity storage concepts, Advanced Rail Energy Storage (ARES) stands out for its simplicity. Rather than build reservoirs or towers, it plans to simply use excess power to drive a train uphill, then recover the energy on the downhill run. In 2020, the company was said to be developing a 50 MW merchant energy storage project at Gamebird Pit, a working gravel mine in Nevada, USA. The project was expected to involve 210 train cars on a closed set of ten multi-rail tracks.

While the battery industry clearly faces many competitors, some companies are still committed to batteries – just not lithium-ion ones. Eos Energy Storage of the USA has spent more than a decade developing a zinc hybrid cathode battery that uses more common materials than lithium-ion. Despite slow progress, the company listed on the Nasdaq stock exchange in 2020 and has seen growing orders in the last year. Eos says its batteries can provide up to 12 hours of energy.

When it comes to serving the grid, the energy storage industry is every bit as diverse as the renewables sector, with wildly different technology concepts vying to serve electricity networks worldwide. Which ones will win out remains to be seen and will largely depend not only on costs but also on whether grid operators and energy providers trust a company or an idea that does not have much of a track record.

At the same time, there is a consensus that for very long periods, such as the average wintertime week or two a year in Europe when there is little wind or sunshine, most of the technologies today will struggle to manage. For these periods, the likely solution will be to use hydrogen produced from renewable energy. This ‘green’ hydrogen could be made in bulk using offshore wind and then stored in caverns, as natural gas is stockpiled today.

That said, green hydrogen might also be needed for a range of other uses, such as providing a feedstock for fertiliser or powering shipping and aviation, so it too might only be used for energy storage in a limited number of situations. Whatever the case, it is a good thing there are so many ways to store energy – and companies bringing the concepts to market. 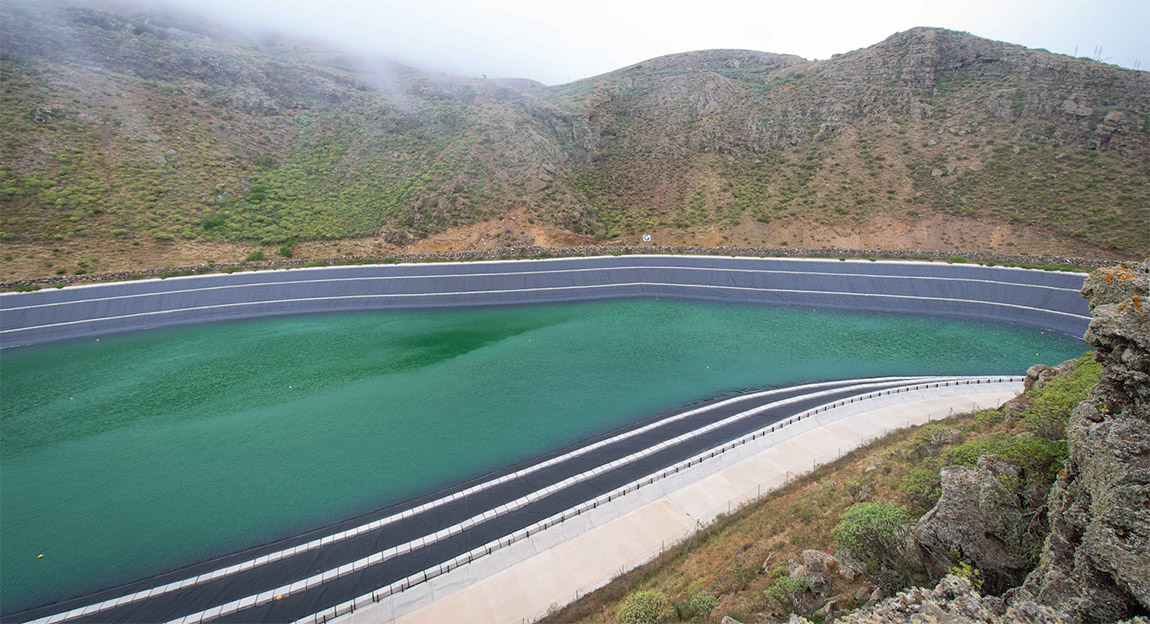