Cleantech Venture Capitalists are all Marxists. Who knew?!

Recently I was fortunate to be asked to speak and moderate at a cleantech retreat taking place on a small man-made island off Copenhagen. The event, Forward22, organised by Rockstart, a cleantech accelerator and VC, was a small gathering of founders, entrepreneurs, venture capitalists, investors, bankers and NGOs, all active and committed to the cleantech and sustainable food sectors. I was surprised, but by no means shocked, when one of the sessions I was moderating, on ‘Rethinking Consumption’ as part of the ‘Driving the Energy Transition’ theme, turned a bit, well, Marxist! Sort of.

As I write this, Taxonomy is a hot topic, with the UK government announcing debt underwritten tax give-aways that crashed the pound and irked the markets. It also prompted the Bank of England into action and will probably lead to much higher interest rates than we have been used to for many years. What’s this got to do with cleantech you may ask.  It’s fair to say that tax is never popular, or paying tax is never popular at least. Yet one clear theme came from the discussion I was hosting; that taxation, on everything, was a radical and necessary action to help address climate change and to help reverse our current unsustainable ways of living. Mandatory taxes that ensure that ‘polluters pay’ and that we stop using the atmosphere and the environment as open sewers, free to trash.

Because it’s not about the technology

Those on the island knew that technology isn’t the issue. As you will have seen and read in Discover CleanTech, technologies exist to solve all of our clean energy and mobility requirements. Yes, they will improve (as all technology does) and they will get cheaper (as everything that scales does – just look at solar and batteries as an example), but we already have the products, technologies and solutions to dramatically and quickly head towards a net-zero economy. As many at the event were from the venture capital and banking sector, we also knew that there is no shortage of capital to deploy to fund the rollout of these technologies.

It’s about political will and human behaviour

If we have the technology, and we have the money, why aren’t we doing all we can to save our species, and many others, from extinction?  One key element is of course political will, and politicians being unwilling to be unpopular (ironic, as they pretty much all are). But we also concluded that humans, at mass, do not make good decisions about our wellbeing or survival. Education we concluded was critical, but that we as humans couldn’t be trusted to do the right thing, even when shown the facts. The evidence supports this. 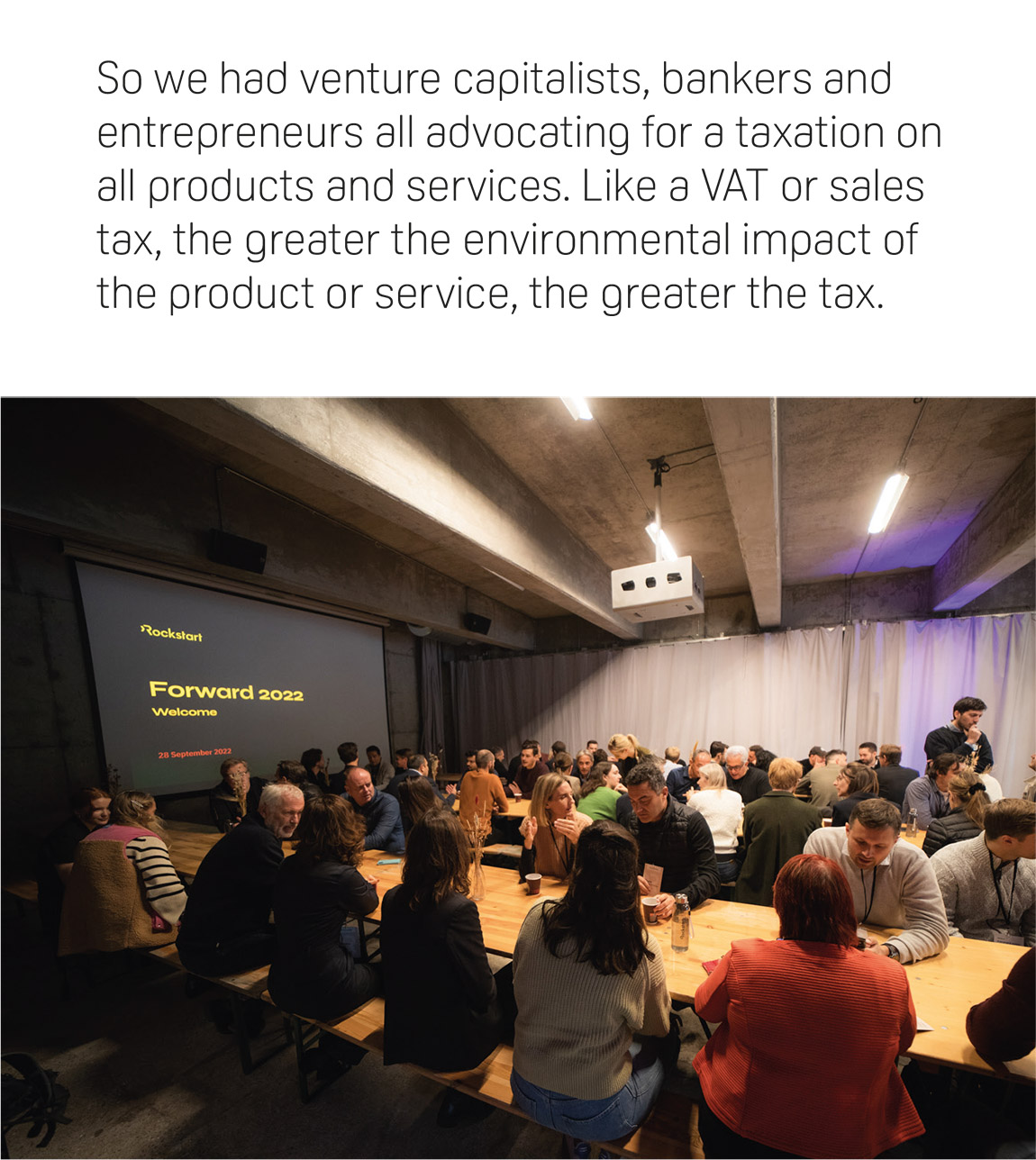 So those who consume most, travel most, have the most expensive (and polluting) cars, houses, boats and lifestyles would pay the highest levels of tax. What’s more, that tax income would be well spent on a Universal Basic Income for all, and redistribution to aid the transition to a sustainable society, and to support developing countries in particular.

We recognised the ‘undemocratic’ nature of mandating such a tax on all, and of course how unpopular we would all be. We also agreed that being unpopular was a fair price to pay for helping to reverse the destructive course we are on as a species.  And whilst our taxation wish was just that, we all agreed to be prepared to be the most unpopular in any room we occupied as we stood up for the need to radically change how we live, and to pay for the consequences of our choices.

It’s fair to say that the above wasn’t the outcome any of us expected from the conversation, but it was universally agreed on. It would be undemocratic, yet we would each speak up for democracy. I believe it was Winston Churchill who said: “Democracy is the worst form of government, except for all the others”. China, for all its negatives, has made huge advances in renewable technologies, batteries and electric vehicles – being the global leader in all of these things – as it can mandate action and take that action immediately.

So, as advocates of clean technologies, and I assume, a transition to a cleaner, more sustainable world, would you agree or disagree with such a taxation? I’d be interested to hear.