Enjoyed all over the world but grown mainly in the developing world, coffee is a product that connects us in more than one way. But as consumption continues to grow, so does the need to focus on ways to lighten the environmental footprint of the industry, and it is not just about new high-tech solutions, but also about looking to the past.

Few of us, this writer included, would be likely to happily give up our morning coffee – or the afternoon one for that matter. The smell, the warmth, the light buzz of energy, and the social charm of chatting over a tall latte – it is all part of the black brew’s borderless appeal. However, with more than two billion cups of coffee consumed every day globally, the coffee industry’s contribution to the climate crisis cannot be ignored. A study made by Professor Mark Maslin and PhD student Carmen Nab at UCL states that weight for weight, coffee produced by the least sustainable means generates as much carbon dioxide as cheese. And what is more, the study states, global coffee demand is expected to triple production by 2050. To put this into perspective, having one cup of coffee a day increases your greenhouse gas emission by approximately 155kg per year (equivalent to driving approx. 640km in a combustion engine car). Now multiply that by more than 2 billion and then triple it! That will be the coffee industry’s annual footprint in 2050 if nothing changes. 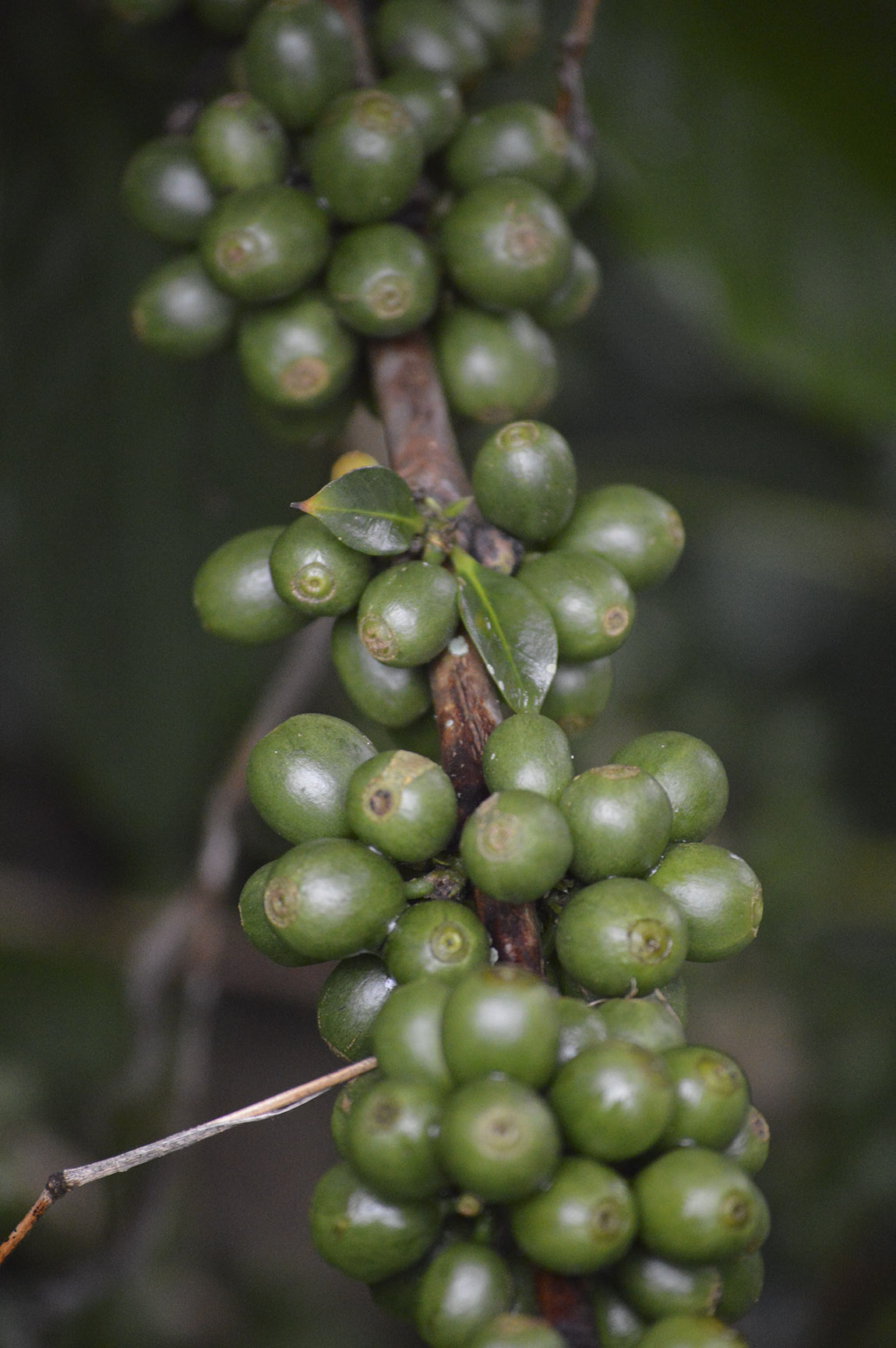 It is clear that, however much we love coffee, lowering the carbon footprint of the world’s favourite hot drink is a necessity to preserve the welfare of our planet. The good news is that according to the UCL study, the footprint of coffee produced could be slashed by up to 77 per cent by changing how it is grown, transported and consumed.

While a large part of the carbon footprint of the coffee industry comes from the process of milling, roasting and transporting the coffee, all processes that rely on availability or creation of green energy, reducing transport emissions or offsetting to lighten their footprints, the way the coffee is grown can also make a significant difference. Especially since coffee is often produced in low-income countries where native forest may be legally or illegally cleared to provide space for plantations, creating negative environmental effects in the form of loss of biodiversity, soil depletion and the carbon released into the atmosphere through deforestation. On top of that, the use of fertilisers and mechanical farm equipment heavily increase the carbon footprint of coffee.

This is why many see organic agroforestry as the best way for the industry to provide its customers with a more sustainable option for their morning sustenance. Monika Firl, senior coffee manager at Fairtrade International, is one of the advocates arguing that a transformation of the coffee industry into agroforestry is the only way forward. “Agroforestry coffee is the future for coffee – I’ll say that till the cows come home,” she says. “I have seen the most incredible results from using regenerative organic practices with filtered shade and building up the health and life of soil. It’s absolutely possible for this to become the new norm – or go back to being the norm.”

Left: Bringing the biological life back into soil, compost enhanced with beneficial bacteria, locally managed tree nurseries, youth engagement, regular training and exchange with members are all pieces of the learning and experimentation process that COMSA, an Organic Fairtrade certified coffee co-operative, shares with its own membership and beyond. Right: Alberto Caballero, “comandante composta” at C.A.C. Pangoa, in the Selva Central of Peru. Caballero discovered the power of living soil in a Farmer-to-Farmer workshop at COMSA in Marcala, Honduras. Upon his return to Peru he has dedicated his work in Pangoa to share and educate other farmers about best practices to accelerate soil regeneration.

What happened to coffee

When Firl says that shade-gown coffee and agroforestry could go “back to being the norm”, it is because the kind of coffee cultivation that is currently used in many large-scale plantations has not been the norm for long. Discovered in the forests of Ethiopia more than 1,000 years ago, coffee originally grew as a shrub underneath the forest canopy and was for long also cultivated in the shade. However, during the 1960s and 1970s, as coffee consumption grew, the coffee shrub was increasingly taken out of the forest and bred, forced and coaxed to live under the full sun. Firl explains: “Creating the sun-tolerant plantations came at a cost; insecticide and pesticides became necessary to protect against the natural predators in the way that the forest used to do naturally. It also brought on all kinds of carbon emissions, not only by destroying soil and habitat, but also by   using external inputs to produce the plants.”

While Fairtrade as an organisation was created to level the playing field and create fairer terms of trade for the world’s millions of small-scale coffee producers, the organisation is increasingly working with environmental issues as well. Because, says Firl, it is all interconnected, and “if climate and environmental issues are not taken into account, then a huge piece is missing”.

Thus, the organisation has launched a number of initiatives to help create more sustainable production systems; one of them is looking at how the organisation can help build pathways to agroforestry. 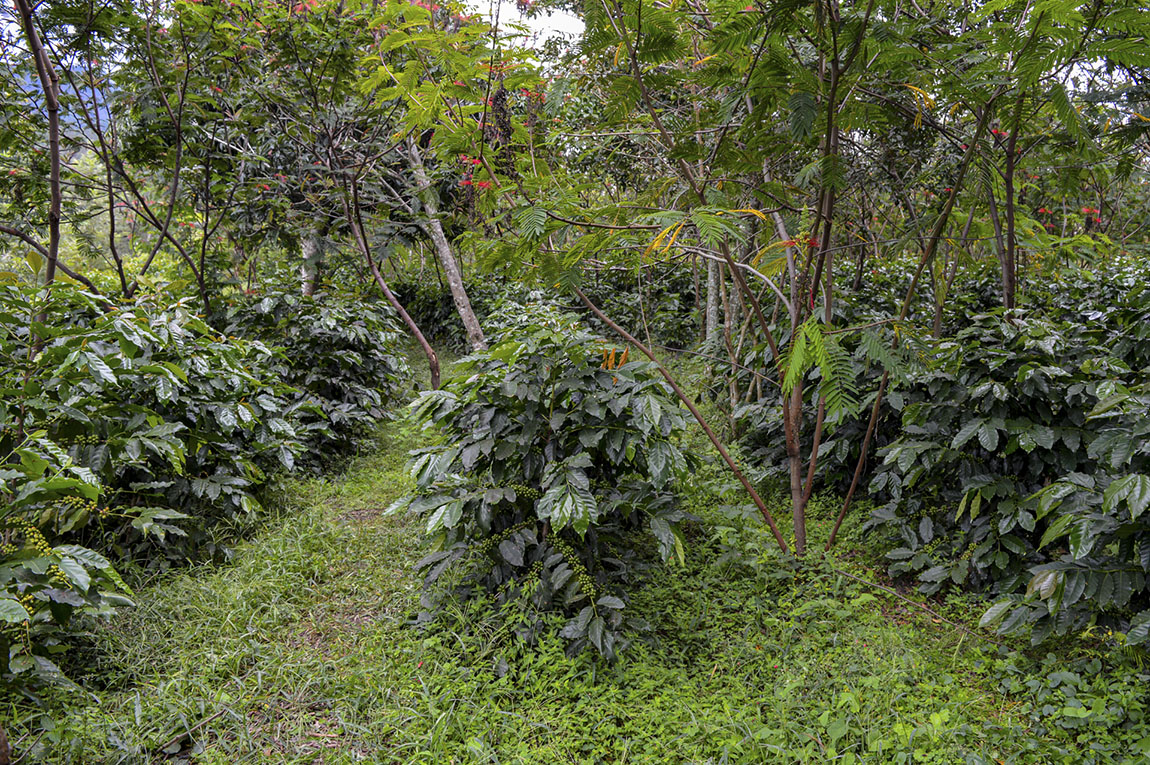 In short, the aim of agroforestry is to bring coffee back to its natural state; use the organic infrastructure of the forest to protect from disease and pests, avoid carbon emissions from fertiliser usage, deforestation and mechanical aids, and turn the plot into a carbon sink. Needless to say, agroforestry also increases biodiversity, and as the system rebuilds soil and increases the amount of water it can absorb, it can help protect farmers from the wreckage of drought and floods, something that can have a devastating impact on plantations.

“I have been in places where I’ve seen entire mountain sides washed away from hurricane damage. But I could see the little squares of shade-grown coffee where tree roots were able to hold the soil in place. Everybody else lost not just their coffee, but also all their topsoil,” says Firl.

Of course, not every coffee plantation will be able to convert to agroforestry. In Brazil, for instance, many large-scale coffee plantations are set up in an industrialised manner with mechanical pickers that require a certain spacing between rows. But that is not the norm. Of the approximately 12.5 million coffee farms in the world, around 80 per cent are small-scale producers. With a total of around 11 million hectares of coffee plantation in the world, transforming the small holders could thus provide great environmental benefits. And as virtually all small-scale farmers are already working without mechanical aids and fertilisers, due to their high cost, transitioning back to agroforestry is very much within their production model. “It’s very compatible in every sense because of their size and income and access to infrastructure,” Firl explains. “They are working with very rudimentary tools, a machete and a basket, it’s zero emission technology, and just small amounts of energy usage in depulping and processing so that transition is viable. […] The transition will look different  from farm to farm, but the additional potential to improve the health of the land, the productivity and the family income can help make this positive change happen.” 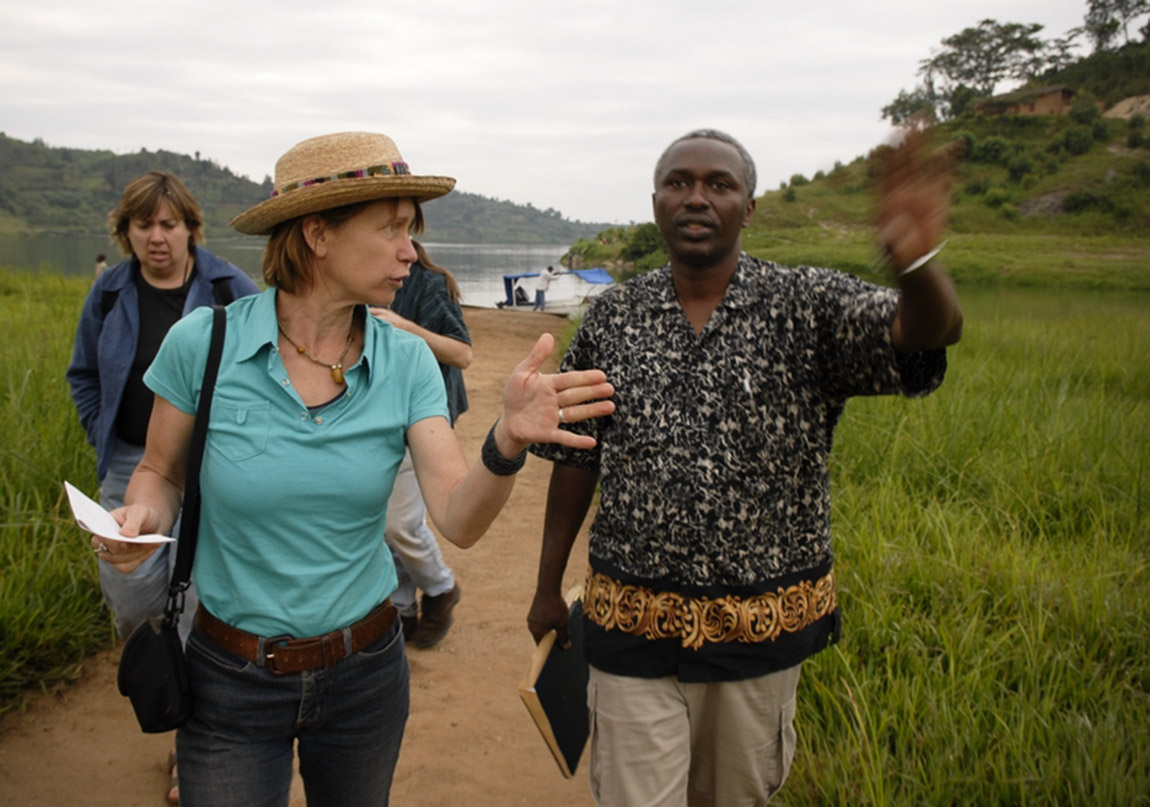 Monika Firl, senior coffee manager at Fairtrade International, is convinced that agroforestry is the future for coffee. Here seen on a trip to Rwanda. Photo: Gary Howe

From start to finish

As carbon is stored in biomass, agroforestry can also help improve the carbon footprint of the coffee industry by turning the plot into a carbon sink. The more the field is thriving and growing, the more microorganisms live in the soil and the more carbon is stored in the biomass. Another tool to further carbon sequestration is to create biochar from the residue from pruning and then using that biochar to bind carbon in the ground.

However, coffee’s big problem is not just in the beginning or middle of the production chain, but also at its end, where millions of tonnes of used coffee grounds end up in landfills where they produce harmful methane emissions. In the UK, the company Bio-bean is working on reducing the impact of this waste by collecting and reusing the coffee grounds. Jessica Folkerts, the company’s head of marketing, believes it is essential to look at the entire supply chain, from start to finish, to improve the sustainability of the industry. “For coffee, that’s everything from labour policies and agricultural practices and impact, right through to waste disposal and recycling. If you examine each stage individually, as well as the entire process as a whole picture, you’ll see aspects where carbon reduction and even a closed loop model are possible. And so often, valuable resources with vast, and as of yet unseen potential are right under our nose,” she says.

Most important for any of the changes to have an impact is of course the possibility of scaling up to have an effect on the enormous industry that coffee is. To do that, the willingness of customers to pay a little extra for sustainably produced coffee is vital, says Firl. “I am hopeful that the average consumers will understand that if they care about their coffee in the morning, they can also care about the planet – people can make the simple choice of picking up a coffee that is healthy for the planet, good for the farmers and delicious – and the best thing is, you can have all of that in the same cup!” 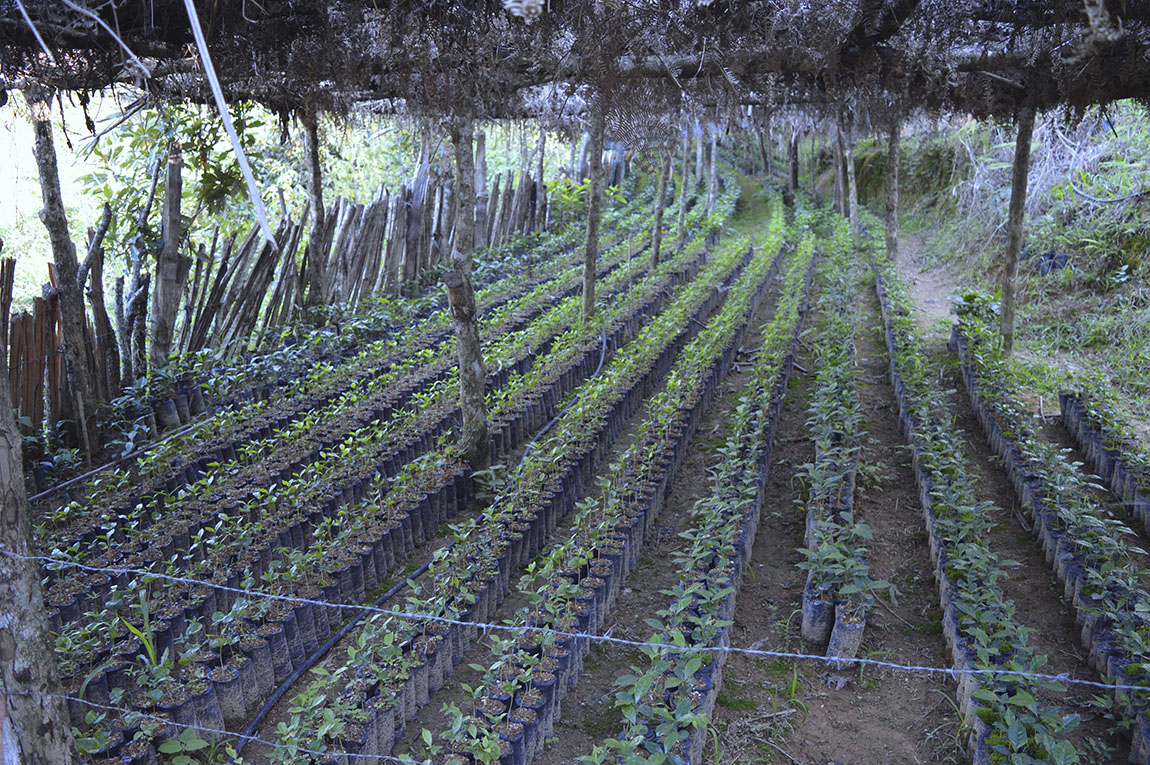