Marjan van Aubel: Designing for a future of solar democracy

Using her designs to explore and tell the story of a future free of fossil fuels, Dutch designer Marjan van Aubel has designed a number of striking solar works, aiming to democratise solar energy and make it available to as many as possible.

“It is about imagining how in a hundred years, we want to live – that’s the principle you, as a designer, have to integrate, you have to be moving towards that,” says Aubel.
Indeed, the word ‘futuristic’ does seem highly apt in the description of Aubel’s designs, which utilise, integrate and captivatingly showcase the newest possibilities of solar technology.

“We have an abundance of sunlight, but we are not using it enough; there’s so much potential,” she explains. “I want to focus on that and on how we can capture that energy, and turn every surface into energy harvesting, make every object and building harvest its own energy. If you can do that, solar provides a very democratic source of energy, you can have it everywhere, on very big or very small surfaces.”

By integrating solar cells in stylish design items that work inside the home, the designer thus hopes to democratise solar energy by making it accessible to everybody in their everyday life. 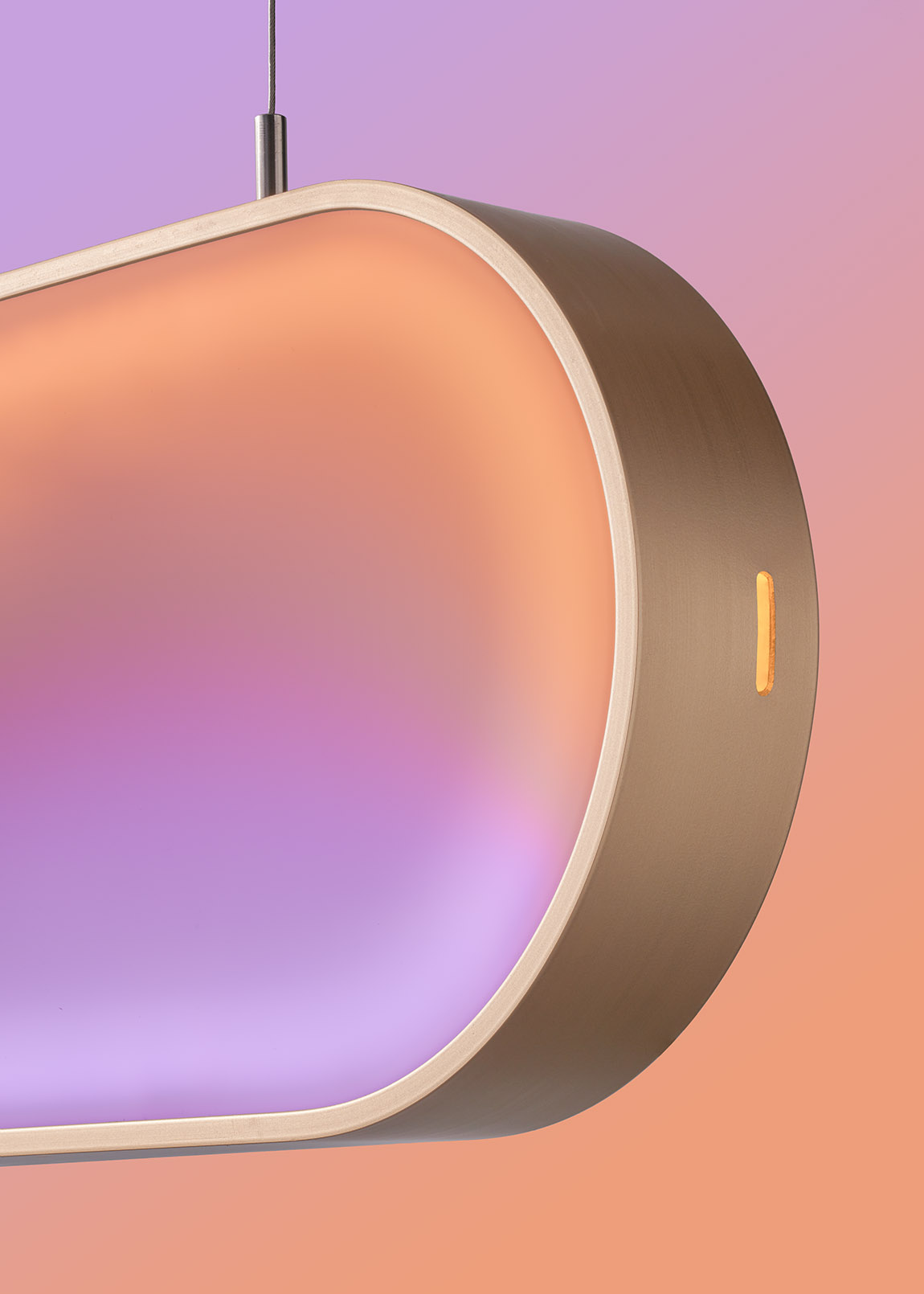 The Sunne lamp is made from one long curved strip of aluminium, shaped like the horizon. Thanks to the lamp’s curve, the solar side of Sunne has a larger surface that allows for maximum solar cells to harvest energy. The energy is stored in an integrated battery. Photo: MvA Studio

One of Aubel’s current designs is her solar lamp, Sunne, which can recreate the sunset at night with the power collected from the sun during the day. In other words, the lamp literally brings the sunlight into your home at night. The light has three settings that imitate all the stages of the natural sun, the sun rise, the sun set, and the day glow. Explaining how she came up with the idea for the design, Aubel says:

“I think most people, like I, like the moment when the sun goes down and you can see the change of colours. I wanted to capture that magical moment and put it in a light, and I thought – why not use the energy from the sunlight to power it… The idea was to have a never-ending sunset, created by the sun.” 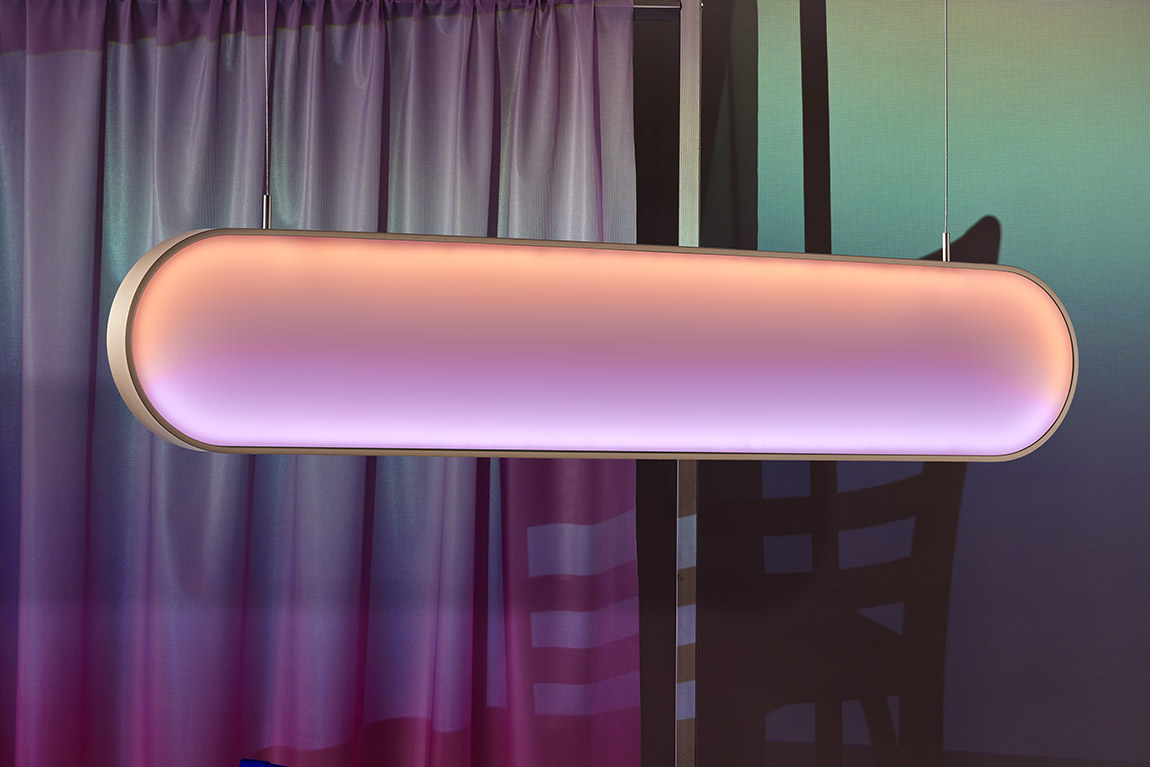 However, Aubel stresses, though the idea was idealistic, its realisation involved a lot of practical considerations. To solve some of the challenges of creating an indoor solar product, she employed technology developed in collaboration with Dutch energy research centre ECN.TNO.

“Regular solar panels are developed to be outside and directed towards the sun, so if you move it indoors, behind glass, and you don’t know where people will place it, you have to have another technology. When you are working with the sun and cannot control these aspects, you need to develop a solar cell that works under different light conditions,” she explains.

The technology from ECN.TNO means that while the lamp needs light to work, and it will work the best if facing south, it will also work if facing north.

The design for the lamp won Aubel the Dezeen Award’s Public Vote for Lighting Design of the Year in 2021, as well as the Wallpaper Life Enhancer Of the Year Award. After a crowd funding campaign to start production last year, her studio received more than 2,000 prepaid orders, and is now setting up a website and production site for the lamp. 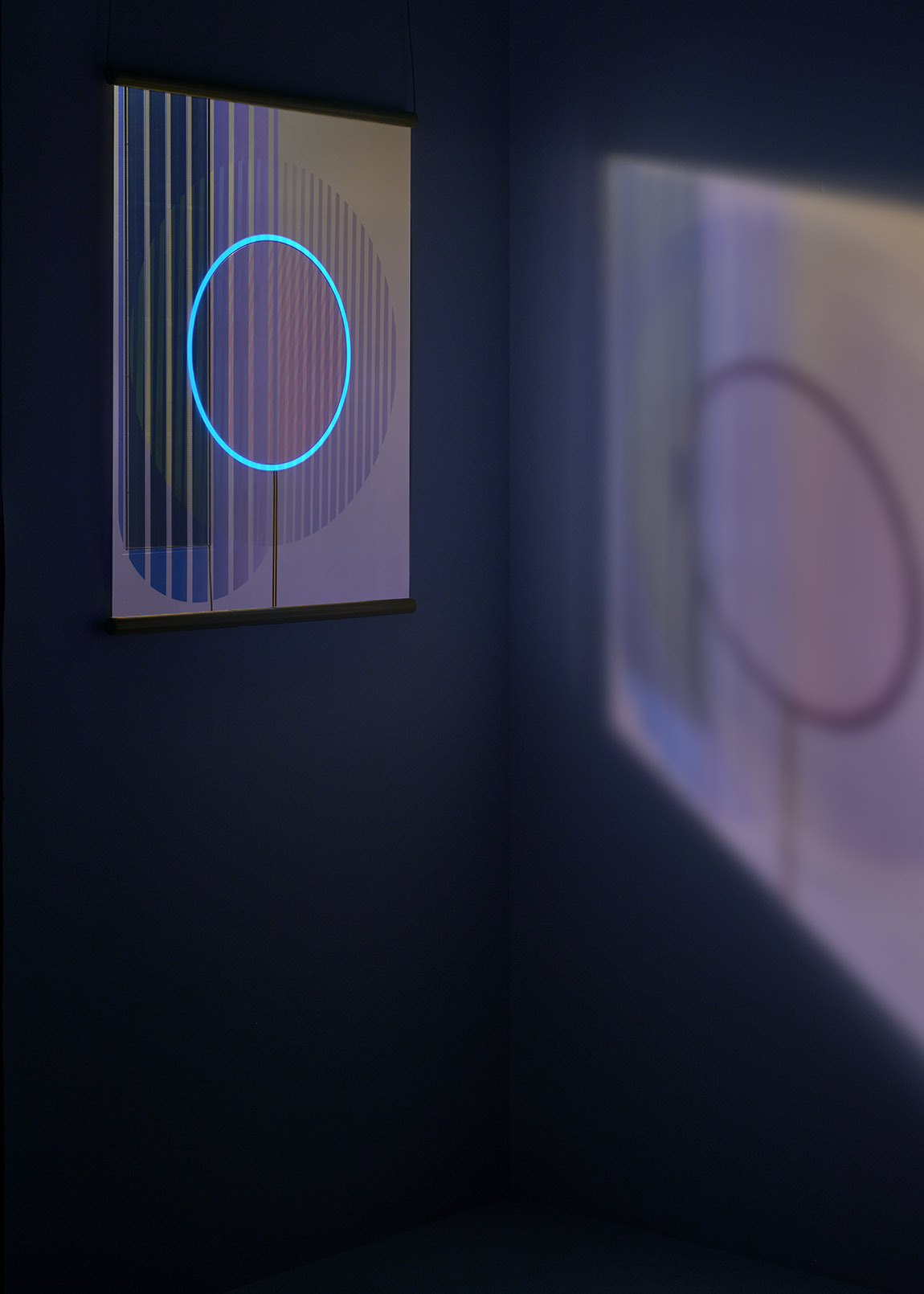 While Sunne is the first of van Aubel’s solar designs to become commercially available (others have ended up in design museums such as MoMA in New York) it is unlikely to be the last. Among other current designs is Ra, a work that turns solar energy into a form of art. Using organic photovoltaics, a third-generation solar technology that is printed on thin foils and is produced in a circular manner, the electroluminescent paper of Ra changes colours throughout the day, depending on the position of the sun. In the evening, a glowing ring proudly displays its captured energy in the form of light. 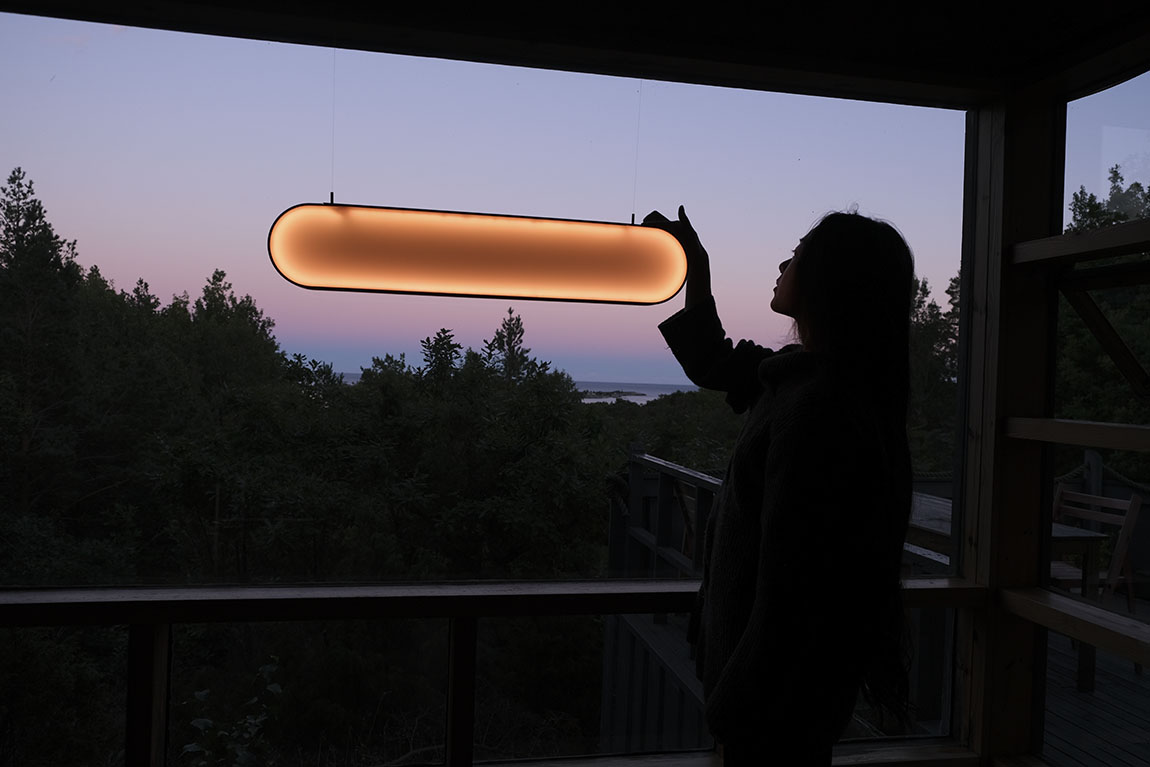 And while the name of Ra is inspired by the past, Aubel hopes that the Ra series will tell the story of a post-fossil future where people have turned to the power of the sun “where we will look up at the sky instead of digging down into the ground”. It is a techno-optimistic view, but it is, says van Aubel, the only way to think about the future. “I don’t think we have a choice,” she answers when asked if she is a technological optimist. “If you look at the numbers and the facts, it is very depressing. It does not look good. The only thing we have is hope – there are still ways of fighting and, as a designer, I try to contribute in the way that I can. I will not produce if what I make just contributes to creating more stuff. What I am building needs to contribute to creating a better world. Design can create intelligent change – change behaviour –  by creating an object to make the possibilities tangible, and that is what we, as designers, need to do – inspire the development of change.”

Left: The works by Dutch designer Marjan van Aubel focuses on what she calls a future of solar democracy, how solar cells can be integrated into daily life and made available for as many people as possible. Photo: Sander Plug. Right: Photo: MvA Studio

Together with fashion designer Pauline van Donge, Aubel has created the Solar Biënnale to “present a new and holistic perspective on the energy of the sun”. The first Solar Biënnale will take place in the Netherlands from September to October 2022, with the city of Rotterdam as the main location. The Solar Biënnale explores new solar futures built on the power of design. The central question of this first edition is: ‘How can we design a post-fossil future using the power of the sun’. 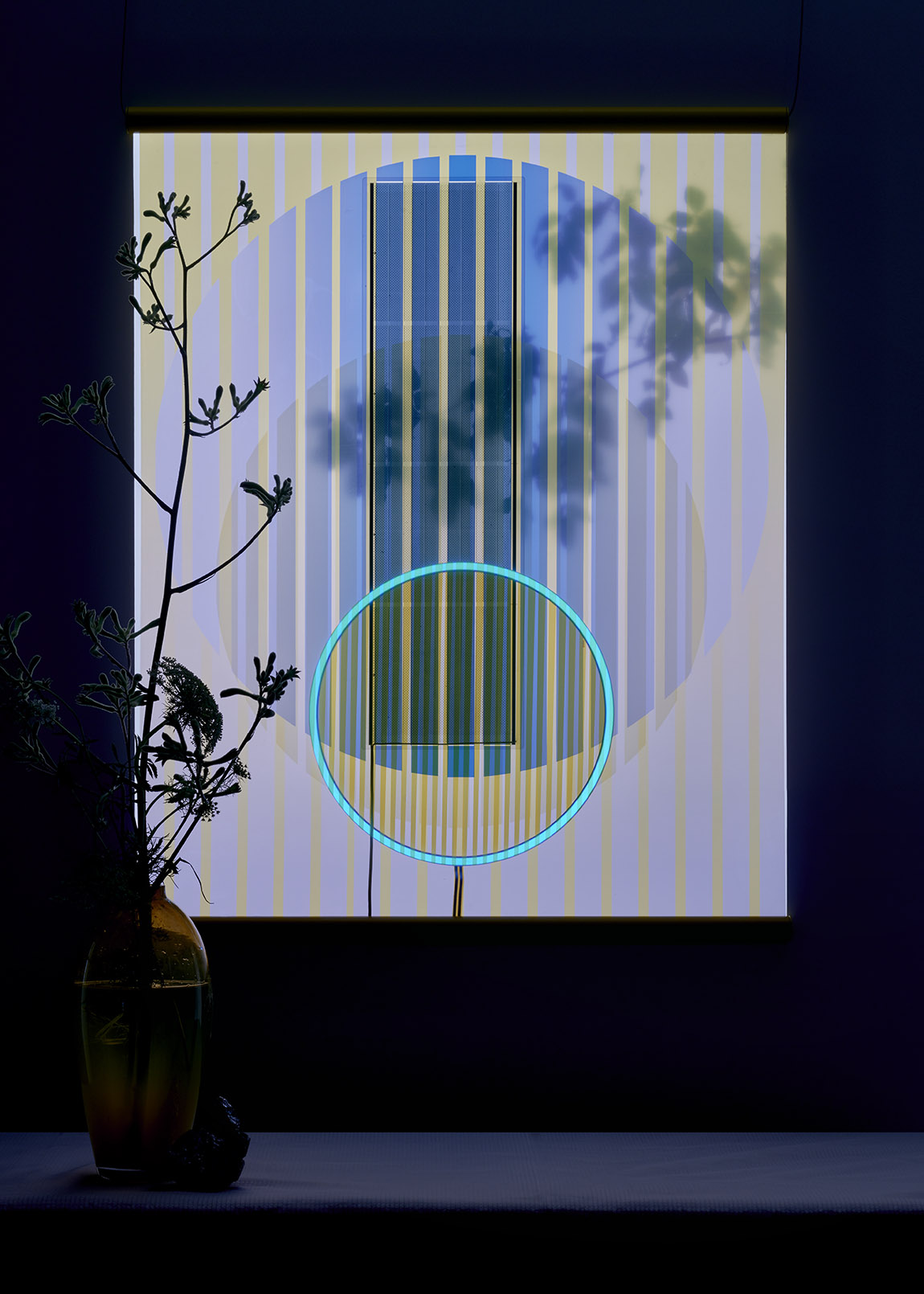 Cleantech Products of the Month: November 2022

Cleantech Products of the Month