Offering an electric-only range of approx. 40 kilometres and a full range of 700 kilometres, Bentley’s second hybrid vehicle, the Flying Spur Hybrid, elegantly illustrates how luxury, power, and cleantech can be combined. Furthermore, the model has demonstrated the potential of second-generation biofuels in offering a greener conscience for owners of traditional Bentleys, too.

Crossing the whole of Iceland in one stint, Bentley’s second hybrid vehicle, the Flying Spur Hybrid, has demonstrated the power of combining renewable electricity and biofuel.

The launch of the new hybrid vehicle is part of the brand’s Beyond100 strategy which includes switching its model range to offer exclusively plug-in hybrid or battery electric vehicles by 2026, and full electric vehicles only by 2030.

However, during the Iceland trip, the hybrid also demonstrated the potential of Bentley’s research into second-generation biofuels that can be used without engine modification.

Mike Sayer, head of product communications, says: “The focus on electrification is the backbone of our strategy as we launch our new hybrids and continue the journey to our first BEV (battery electric vehicle) in 2025.

At the same time, we’re looking to become more sustainable in every single area of our business, and the potential of renewable second-generation biofuels can’t be ignored.

The trip across Iceland is part of our research into the progress of such fuels, proving that genuine grand touring range can be delivered sustainably in our new Flying Spur Hybrid, without any modification needed to accept renewable fuel.”

During the 733 kilometre trip across Iceland, the Flying Spur Hybrid was powered by a combination of 100 per cent second generation biofuel and geothermally-sourced electricity available from the Icelandic power grid. The combination meant an overall reduction of 45 per cent in CO2 emissions on a well-to-wheels basis over the course of the Iceland adventure. 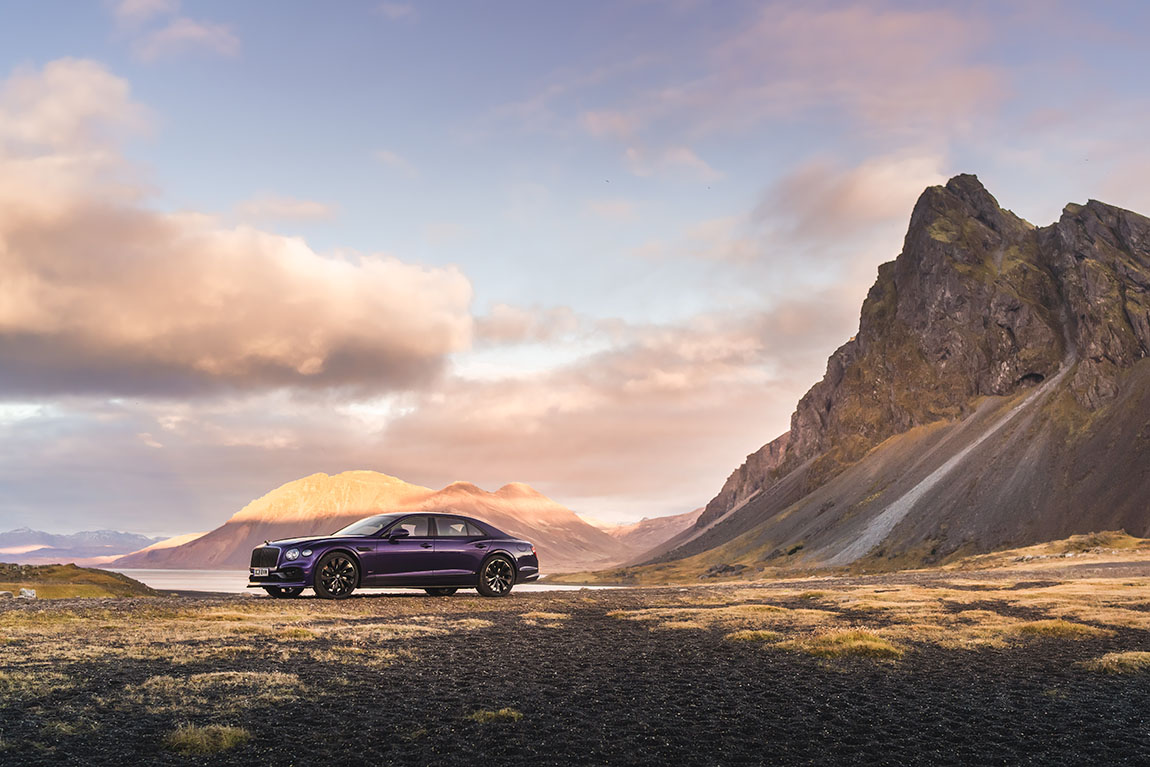 Covering the 733 kilometre trip across Iceland in one stint on a combination of green electricity and second-generation biofuel, the Flying Spur Hybrid demonstrated the possibility of offering a cleaner conscience to owners of both hybrids, EVs, and traditional petrol fuel vehicles.

A cleaner conscience for all, not just EV owners

Following the Bentayga Hybrid, the Flying Spur Hybrid is the second hybrid to be launched by Bentley. However, with the trip across Iceland, the model also demonstrated the possibility of offering owners of traditional Bentleys a cleaner conscience too.

The fuel used during the trip conforms to the same EN228 standard as ordinary pump gasoline, yet it is created entirely from waste biomass (e.g. straw).

“Our Beyond100 strategy still targets being an all-electric brand by 2030. However, that doesn’t mean that renewable biofuels don’t play an important part in the near and long-term futures as we want our existing customers to be able to enjoy their gasoline-powered Bentleys in a responsible, environmentally sustainable way for many years to come,” Sayer explains. 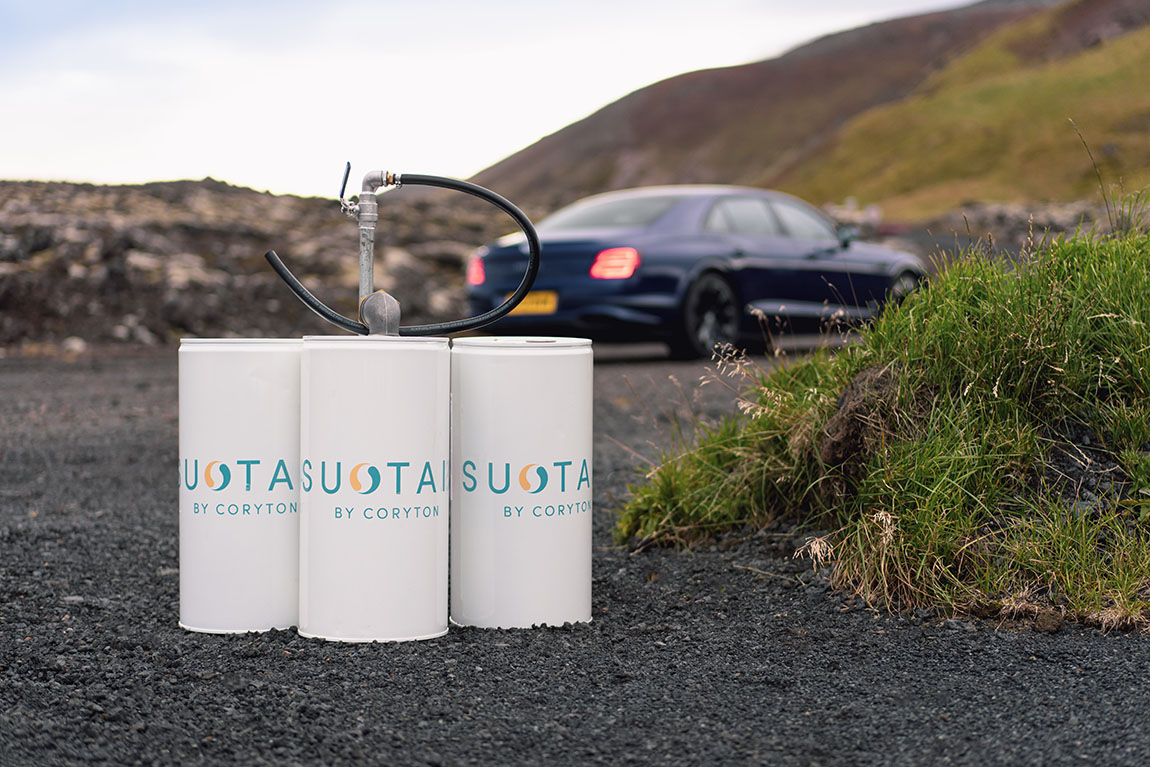 The renewable, second-generation biofuel used by Bentley is made from waste biomass such as straw and developed by Coryton, who is supporting Bentley in its renewable fuel research.

The 100 per cent renewable, second-generation biofuel used was developed by Coryton, who is supporting Bentley in its renewable fuel research. The production process sees waste biomass (e.g. straw) broken down using fermentation, leading to the creation of ethanol.

Dehydration of the ethanol converts it to ethylene, which can then be transformed into gasoline through the process of oligomerisation – chaining short hydrocarbon molecules together to produce longer, more energy-dense ones.

Bentley’s Member of the Board for Engineering, Matthias Rabe says: “We’ll continue working with such fuels in the coming months as part of our development process, with the end goal of a customer-facing solution.” 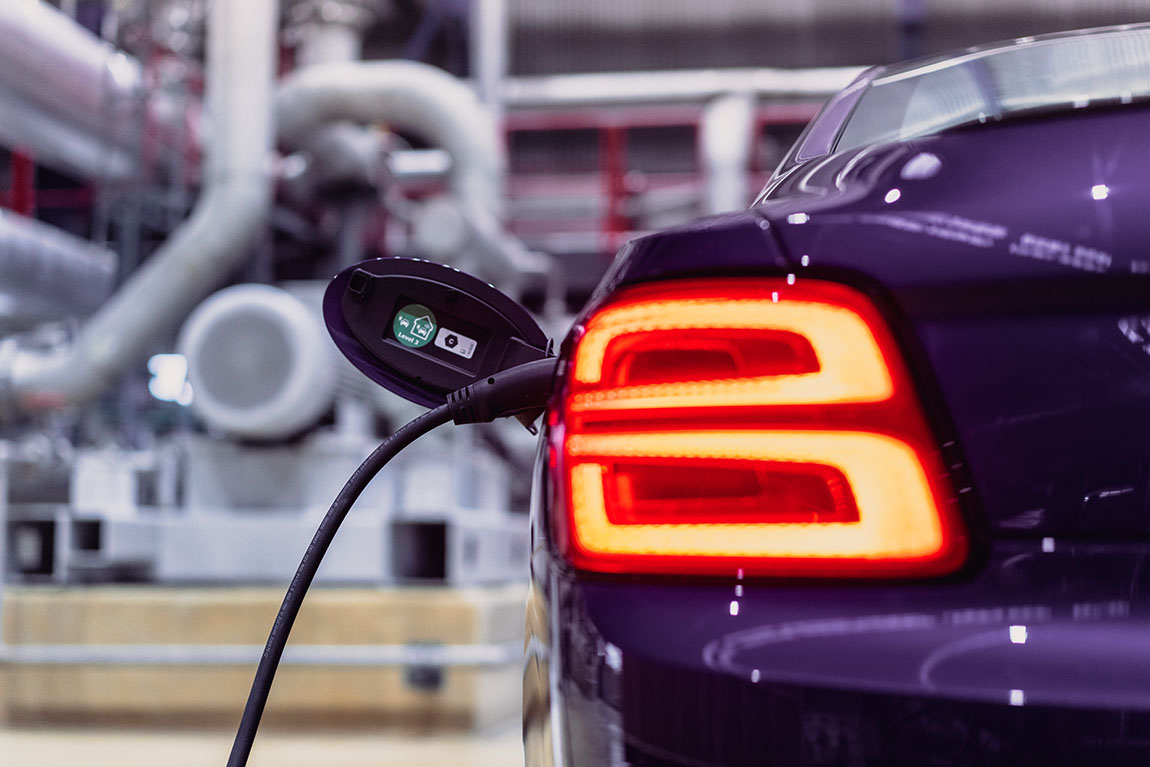 Looking at the exterior and interior of the Flying Spur Hybrid, Bentley’s ambition of proving that hybridisation does not compromise luxury or performance clearly projects itself.

With an unperceivable blend between the internal combustion engine and electric motor, the carmaker has maintained its trademark refined serenity regardless of driving mode or style.

However, to provide feedback to the driver, the instruments include information showing when the car is operating solely in EV drive, regenerating whilst deaccelerating or using the combustion engine.

Furthermore, to enable the driver to manage the battery usage during a journey, the automatic Start-Stop switch has been replaced with a control for the three E Modes – EV Drive, Hybrid Mode and Hold Mode. EV Drive mode is engaged as soon as the car is switched on and maximises the electric driving experience. This is ideal for city driving and for shorter journeys.

“With the launch of the Flying Spur Hybrid, we now have a hybrid range at Bentley, and with this challenge (the Iceland voyage) we’ve proved the real benefit of a hybrid – the ability to have an unimpeded grand touring reach of more than 450 miles [724 kilometres), while still having usable electric-only range for urban environments.

It’s truly the best of both worlds, especially when the use of innovative second-generation biofuel means a huge drop in CO2 emissions,” Rabe explains.

The flow of energy can also be displayed via the infotainment screen where statistics can be seen and the timers for charging of the vehicle can be set.

Additional e-motion information is available to the driver via the instrument panel, heads-up display and centre screen, including range, battery level and charging information. 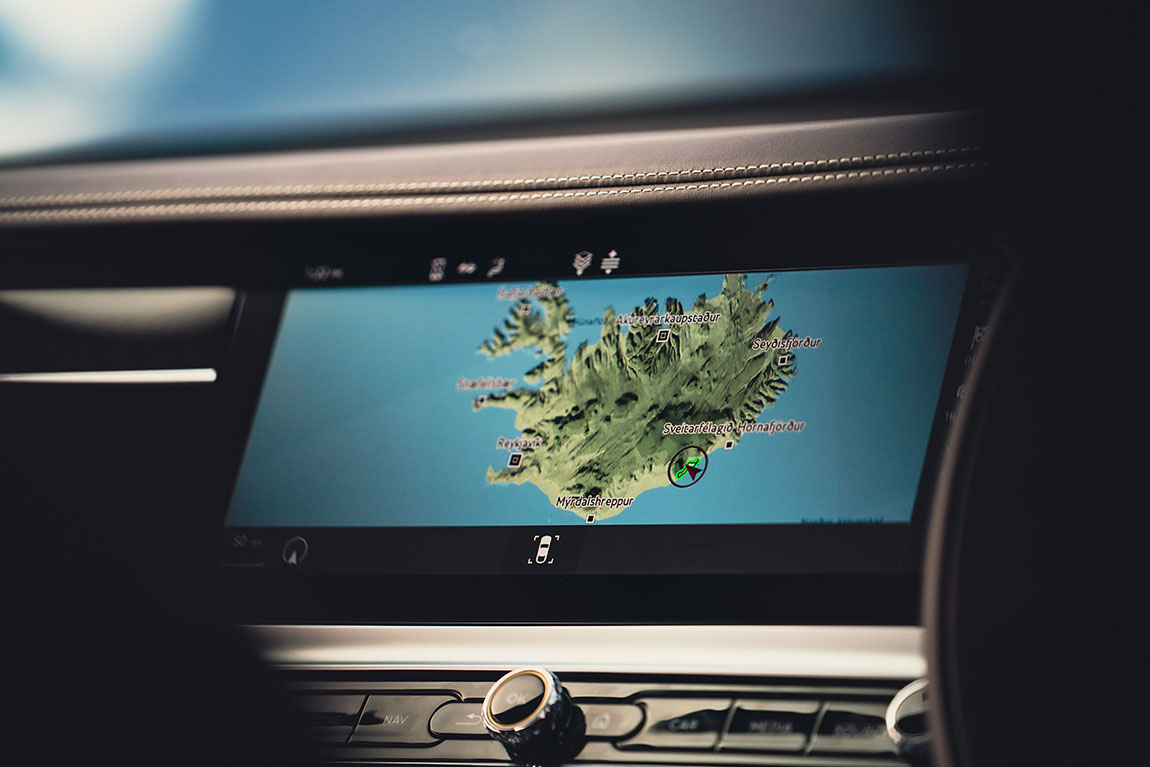 In its Beyond100 strategy Bentley Motors has outlined plans to become a global leader in sustainable luxury mobility. With the promise to offer truly sustainable luxury, Bentley will reinvent every aspect of its business to become an end-to-end carbon neutral organisation as it embarks on its second century.

The target is driven by a transformation programme across Bentley’s entire operations and products. This includes switching its model range to offer exclusively plug-in hybrid or battery electric vehicles by 2026, and full electric vehicles only by 2030.

In 2018, Bentley’s production facility in Crewe became the first luxury automotive factory in the UK to be certified carbon neutral by the Carbon Trust, certification that has since been renewed twice.

This followed two decades of implementing innovative solutions, including a water recycling system in the paint shop, local tree planting, installation of a 10,000 solar panel carport, taking the total number of on-site solar panels to 30,000, and a switch to renewable-only electricity sources.

The Crewe facility will continue to improve its environmental operations. All suppliers have passed a sustainability audit, verifying their sustainability credentials.

In the future, by the end of 2025, the company intends to reduce its factory environmental impact by focusing on energy consumption, CO2 emissions, wastewater, use of solvents in the paint process and becoming plastic neutral. This will result in a ‘climate positive factory’ by 2030, actively reducing level. 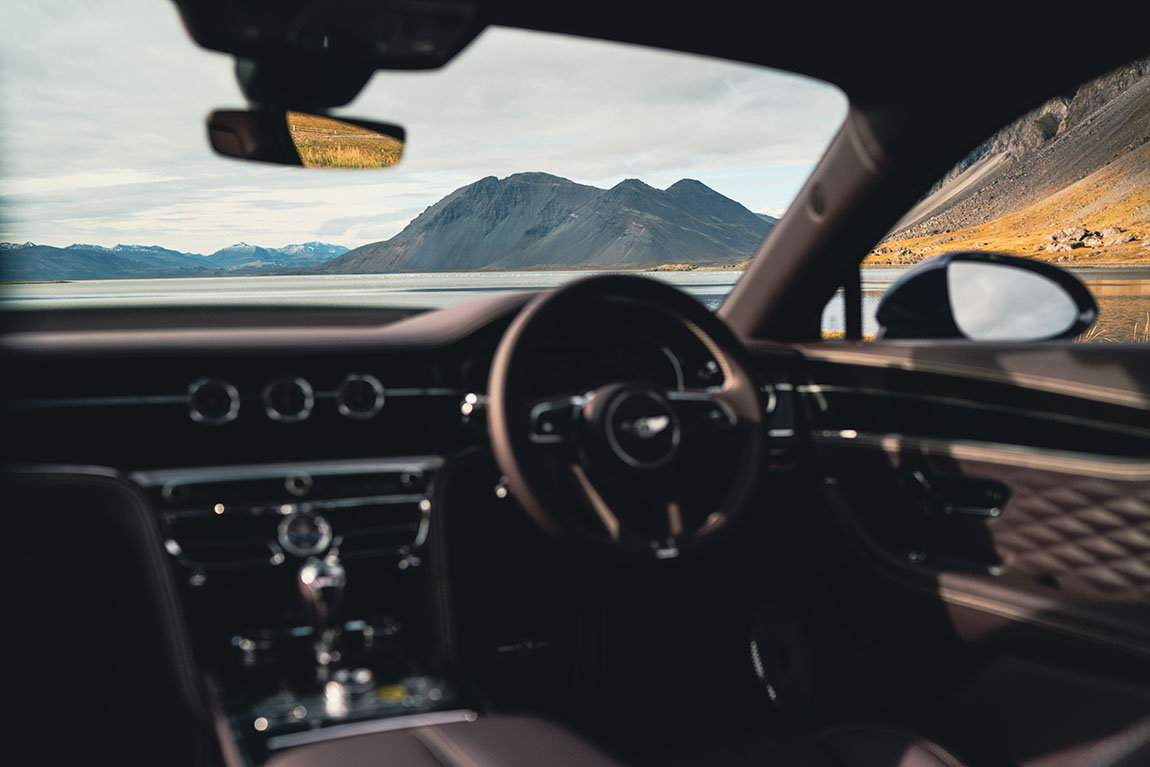 Facts about the Flying Spurs Hybrid The Flying Spurs Hybrid’s new powertrain combines a 2.9-litre V6 petrol engine with an advanced electric motor, delivering a total of 536 bhp (544 PS) and 750 Nm (553 lb.ft) of torque - an additional 95 bhp in comparison to the Bentayga Hybrid. The new Flying Spur thus becomes the most efficient Bentley ever having the capability to cover 700 km when fully fuelled. With high power reserves, superior torque and quick throttle response, the model passes 60 mph from a standstill in 4.1 seconds (0-100 km/h in 4.3 secs). Web:www.bentleymotors.com